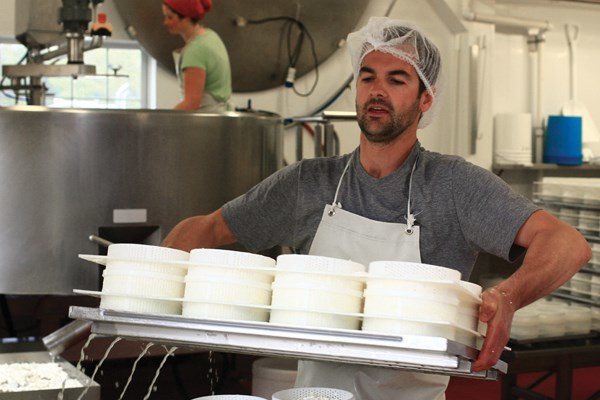 When Sebastian von Trapp was growing up on his parents’ small dairy farm, bought by his grandparents in 1959, he never imagined he would want to build a life there too. But after four years at the University of Vermont and five years working for a software company, von Trapp realized that he missed the farm and wanted to go back. The only problem was that the small milking operation of around fifty cows couldn’t support anyone other than his parents. They had already transitioned the farm from conventional to organic milk, which commands a higher price. But even so, with fluctuations in the milk market, they didn’t have control over the price of their product. What they needed was a new product, and one for which they themselves could decide how much to charge.

Fast-forward about a decade: now, the milk from all the cows on the farm goes into four different kinds of von Trapp Farmstead organic cheese: Mt. Alice, a Camembert-style cheese, named after the peak overlooking the farm; Savage, a hard, alpine-style cheese, aged for eight to twelve months and named after the man who originally settled the farm in the 1700s; Mad River Blue, a mild, creamy cheese aged for about three months; and Oma, a Tomme-style cheese reminiscent of those made in the Swiss and French Alps, and named in honor of von Trapp’s grandmother. All the cheeses except for Mt. Alice are made from raw milk.

Sebastian and his brother Dan developed the cheese business together, though Dan has moved on to other things and no longer works on the farm. They added a cheese-making facility onto the early-twentieth-century milking barn and bought a variety of equipment, including white plastic molds in which the whey drains from the milk, leaving curds that harden into cheese, and a giant dumbwaiter to transport the cheese from where it’s made to where it sits a floor below, aging and getting brined in a warm, climate-controlled room. After spending hours per batch of cheese washing all the equipment by hand, they also bought a giant dishwasher.

To learn the cheese-making business, Sebastian von Trapp spent time at farms in England and France, as well as almost a year working for Jasper Hill Farm in Greensboro, Vermont. (Von Trapp Farmstead’s Oma cheese is aged in Jasper Hill’s extensive cellars, along with cheeses from about a dozen other small Vermont producers.) “Making cheese involves a very steep learning curve, and there wasn’t a ‘Cheese University’ where I could get a good education. I just had to pull together all the right things to learn how to make cheese and put together a business plan that would work on our farm,” von Trapp told me, on the sunny but chilly day in April when I visited the farm.

I got a sense of some of what von Trapp has learned over the years when he took me into what he called the “laboratory” area of the business. There, he showed me the starter cultures for all their cheeses: different formulations of mold, bacteria, or yeast, in little plastic containers, most of them ordered from France. After the cows are milked, the milk travels through sterilized pipes to a 400-gallon vat, where von Trapp or one of the other six people who now work at the farm add a tiny bit—maybe 40 grams, he estimated—of the cultures from the fridge. “Each cheese has a slightly different process,” he explained. “Different things happen in the vat, different temperatures, we cut the curd to a different size, we stir for different amounts of time. That all makes a difference in the final product.”

How long the cheese is aged, of course, also has an effect on the taste. In the lab, von Trapp showed me a tasting panel of twelve samples of Mt. Alice cheese made on different dates. The newest was made on April 12, the day before my visit. The oldest was from February 11, and there was a note next to it saying, “Taste at your own risk.” The workers there sample the cheese frequently, to make sure the taste is consistent, to figure out how to improve it, and to ensure that they’re aging it just long enough—for Mt. Alice, usually about a month. “Cheese is kind of like a living thing,” von Trapp said. “It’s got a life cycle; there’s an age range where it’s good to be consumed. Before that it’s ripening, developing; then the peak; then where it’s too ripe and it’s going south.”

The differences between the cheese samples were dramatic. The youngest one had a mild, buttery, slightly grassy flavor, and a texture a bit like cheesecake. The next one I tasted was creamier and had a salty, nutty savoriness to it. That one, made on March 8, was, in von Trapp’s view, at the ideal age. Last, I braved the oldest cheese, which was gooey, with a slight tang of ammonia to it. “The thing about cheese is a lot of it is about personal preference,” von Trapp said. “Some people would love this cheese. It’s got a lot going on.”

Von Trapp is thinking of adding more types of cheese to the lineup—maybe a Gouda or a cheddar—but not without more milk and a bigger facility. “It’s been really tough at times,” he told me. “Start-up businesses aren’t easy.” For now, though, he’s happy to have found a way for a third generation to make a living on this family farm.

(Von Trapp Farmstead cheeses are available locally at the Waitsfield farmers’ market, Mehuron’s, the Warren Store, and the East Warren Community Market, as well as further afield in places like Formaggio Kitchen in Cambridge, Massachusetts, some Whole Foods Markets, and Murray’s in New York. The farm also sells meat from pigs who are fed on leftover whey from the cheese-making process, day-old Red Hen bread, and spent hops from Lawson’s Finest Liquids. And, yes, Sebastian von Trapp is the great-grandson of Captain von Trapp of The Sound of Music fame.)

STOPS ALONG THE VERMONT CHEESE TRAIL

You could spend many happy days driving and eating your way along the Vermont Cheese Trail, a collection of forty-eight farms throughout the state, from Spoonwood Cabin Creamery, within a few miles of Massachusetts, to Boston Post Dairy, up near the Canadian border. At many of them, you can tour the cheese-production facilities and taste the various cheeses (make sure to call ahead). Others, including von Trapp Farmstead, are smaller operations, where you leave money in a jar in exchange for cheese that you grab from the fridge.

Here are a few favorite stops:

At Cabot Creamery Cooperative, visitors can tour the factory in Cabot to see how the cheese is made, then try a range of the company’s cheddar and other varieties. More than a thousand dairy farms in New England and New York are part of the cooperative, and much of the milk is processed into cheese at the Cabot factory. (Cabot Creamery’s corporate offices relocated to Waitsfield in 2014.)

Grafton Village Cheese Company, located in both Brattleboro and Grafton, is best known for its cheddar cheeses, from wax-encased Vermont-style cheddars aged from one year to more than five, to an English-style cheddar wrapped in cheesecloth and aged in a cheese cave in Grafton Village.

Visit Jasper Hill Farm in Greensboro for some of their Bayley Hazen Blue. While many of the cheeses aged at Jasper Hill are made elsewhere (including von Trapp Farmstead’s Oma), Bayley Hazen is made on-site. It’s been called “one of the most important American blue-veined cheeses” and was also named the world’s best unpasteurized cheese at the World Cheese Awards in 2014.

Shelburne Farms has been making cheddar from the raw milk of its primarily grass-fed Brown Swiss cows for the past thirty-five years. Their cheese-making process is on display in the Farm Barn, part of a larger complex in Shelburne that includes historic buildings, walking trails, and an inn.

Thistle Hill Farm in North Pomfret concentrates on one kind of cheese only: Tarentaise, an alpine-style cheese made using the same traditional methods as on farms in the Savoie region of the French Alps. Like cheese from those farms, Tarentaise gains some of its distinctive flavor from being made in a custom copper vat, the only one in Vermont.