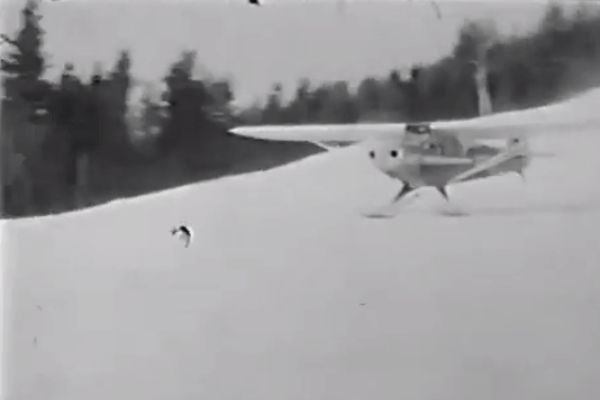 That Time an Airplane Landed and Took off on Snowball

Caper – a noun – a frivolous, carefree episode or activity

It was about 6am on a chilly cold morning in the early 1970’s when Gary Black Jr. and I put cross country skis on at the Sugarbush Valley House Base Lodge and began a slow hike up to the top of the Snowball ski trail. Our mission was not to witness another beautiful Vermont sunrise but to witness an event which had never happened at Sugarbush before, or for that matter, maybe a first at any ski area in the North America.

When we reached the top of the trail, the wind was blowing ever so slightly, almost calm, from the East. If the wind blows from that direction, you can sometimes hear the northbound trains on the other side of Roxbury Gap climbing the steep railroad grade nine miles away. Temperatures were in the single numbers and the morning sun was just about to peek over the White Mountains of New Hampshire.

Gary took the old wind up 16mm film camera out of his back pack, which Damon Gadd let me use for Sugarbush publicity films. However, the film which Gary was about to shoot was not for publicity, but to record a historical event – or perhaps a tragic one.

John Macone was the ultimate “PR” Man. He started “Broom Polo” in front of the old Alpen Inn, which he and his wife owned on Rt. 100. He held annual “Bombing” competitions at the airport where participants would vie for a bottle of Champaign in a “closest to the X” bombing run from an airplane above the runway, using either water balloons or small bags of flour as the “bombs”. John was also a top PR man at the Squaw Valley Olympics in 1960. Perhaps most importantly, he was an avid aviator and accomplished glider pilot. He was the “main stay” at the Sugarbush Warren Airport.

Vermont’s Green Mountain Range is basically situated in a North to South orientation. The prevailing winds are generally from the West and when the Westerly’s blow and bump into the mountains, air rises up (lift) one side (Bristol and Starksboro) and slides down (rotor) the other side (Sugarbush, Warren, Waitsfield). The mountains slow down the lower currents, so, the next air layer slides on top of the slower layer. Successive layers pile up like a stack of pancakes.

Mount Abraham, Lincoln Peak, Mount Ellen and General Stark Mountain form a formidable barrier to these Westerly winds and produce a phenomenon called a lenticular wave. Perhaps you have seen the resulting smooth cloud either shaped like a long hot dog or sometimes stacks of flying saucers over the mountain peaks. The “wave” is responsible for making Sugarbush one of the primer soaring (gliding) centers in the US. Last I knew, the soaring altitude record out of Sugarbush was over 29,000 feet. Now, that’s a lot of “lift”!

On the Sugarbush side of the mountains, the down side air (rotor) has been the primary cause for several small plane disasters. Inexperienced pilots have underestimated the downward force of these rotor winds and have been unable to climb to sufficient altitude to escape crashing into the mountain. Evidence of two such crashes still remain in the trees near the top of the Valley. One is just North of the summit of Mount Abraham (4 men walked out alive) and the other is between the top of the Middle Earth trail off Castle Rock and the most recent big land slide in Slide Brook (all occupants perished)

The “caper” began several nights earlier at the Beef and Bottle restaurant at the Sugarbush Inn. John and I met over several cocktails when he began talking about one of his crazy ideas of landing one of his airplanes on the Snowball Trail at the top of the Valley House Chairlift.

Just happened that the moguls on Snowball were not too huge (we didn’t have the sophisticated grooming equipment back then that exists now) and oddly enough the wind was forecast as “calm” for the next few days. Remember the wind “rotor” mentioned earlier. Well, the Snowball was in the “rotor” zone and if present, could be extremely dangerous to any kind of low flying aircraft.

Needless to say, the caper was hatched.

I drove up to the airport the next day and John gave me a couple of smoke flares. We reviewed the plan and set a tentative attempt for the following morning, depending on suitable weather.

So, there we were on top of the Snowball with the sunrise moments away. The air was so crisp and quiet, we could actually hear John starting up the plane engine three and a half miles away. He had installed ski type skid landing gear on the plane earlier in the winter. He lifted off the snow covered runway and headed towards us. Just before John made his first pass over us and the Upper Snowball landing spot, I lit the smoke flares to show him the current wind which might effect the attempted landing.

Next pass, looked like the final, yup, flaps down, power up, nose up, on the edge of a stall, Gary is filming, John is a MASTER. He guides the plane to an almost perfect, correct that, PERFECT, uphill, three point landing, slightly bouncing along the moguls, thankfully not burying the prop into a pile of snow. He taxis the plane sideways near the old Valley House chair top bull wheel and I tie a rope from a tree to the tail wheel so the plane won’t slide down the trail, no brakes on a plane on skids!

As luck would have it, John turns the plane, the rope breaks, he is headed towards the downhill edge of the trail right for the trees, surely a disaster in the making. But, he is cool headed and throws the engine into full throttle, full right rudder, and “flips” the plane around safely. I retie the rope and reattach it to the tail.

Gary walks further up the hill to the plane, we all hop and jump around in John’s brief moment of glory. Brief, because about two minutes into our celebration, the bull wheel begins to turn. The Ski Patrol is on the way up for trail check. And that my dear friends means, we are Checking OUT !  Macone could get busted and his flight ticked pulled, I could lose my job as Marketing Director at Sugarbush, Black would be the only survivor.

John cranks her up, I get ready to release the rope, Gary rewinds the 16mm and points it at the plane for posterity and we have “lift off”. John is on a down slope track safely back to the airport. Skis back on, we head down the trail and into the Valley House for some hot chocolate.

A couple of minutes later, Holly McAllister comes in the base lodge after completing her morning Ski Patrol check on the Snowball trail.

Holly, “Hi Chan & Gary. What are you two doing here so early? Are those Cross Country ski boots you have on?”

Chan, “Yes, we were just taking a sunrise shot up on the mountain.”

Holly, “I just saw the darnest thing on top of the Snowball. It looked like two straight tracks down the mountain, then they just disappear.”

Chan, “No kidding. Must be something dragging behind one of the snowcats earlier.”

Holly was one of John’s flight instructors at the airport and close friend. To my knowledge she didn’t know the true origin of those “straight tracks” on top of the Snowball until several years later.

I had the film developed and made a couple of copies for John. We all kept the secret for many years. Remember what Stein Erikson said – “What happens at Sugarbush, stays at Sugarbush!”. One of John’s sons eventually posted the footage on the internet. The proof was out, so then we enjoyed showing it to our friends. Somehow, it disappeared on the internet for quite a long time and was just recently rediscovered by Mike Murphy (also an aviator). Mike father was Jack Murphy, Sugarbush’s first General Manager who was also a fervent aviator/plane owner and close friend of John Macone’s.

Jack couldn’t believe his eyes when he first saw the footage and if you know anything about flying, you will be amazed when you view it too.