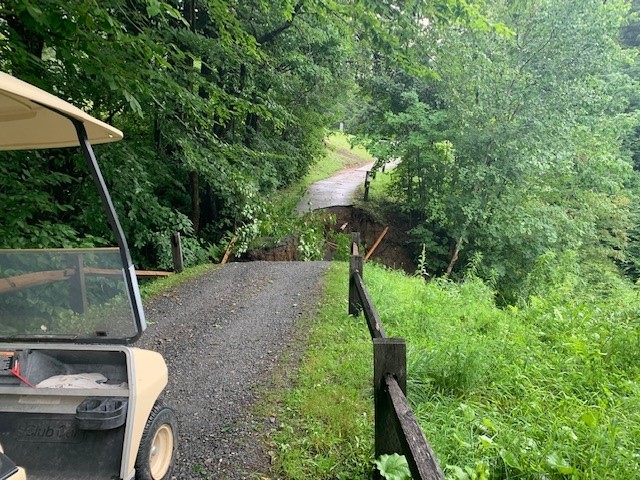 Calamity and Recovery at the Golf Course

After a drought-filled first half of the summer, I think Mother Nature might have overcorrected the other way. The months of July and August have both seen plenty of rain, and I’m all the more grateful for all the drainage projects we’ve completed over the years to prepare for events like this.

At the end of July we received a particularly heavy storm at the Sugarbush Resort Golf Club. If you were anywhere in the northeast you may have had it too. Well that rapid rainfall did a number on our golf course in a matter of hours. It was likely the most significant damage we had seen in years.

That picture is from hole 12 after the storm. If you’re familiar with the course you’ll know there is a pond off camera to the right, but all the water you’re seeing in this photo shouldn’t be there. It was overwhelming.

Even worse was the washout we experienced on the cart path to hold 15 (the photo at the top of this blog). It completely decimated the path, essentially rendering four holes on the course inaccessible. We had to keep those holes closed for three days, but were luckily able to rebuild it enough to get them open for the weekend. Following that, we took another two days to fully repair the path and here’s was the end result.

Additional cleaning up of the area has occurred since this photo was taken but what an impressive effort by our team. They all deserve a round of applause and beer at Hogan’s next time you see them. Tatro Construction also provided some significant help.

As far as other water damage, like that pond on hole 12, it all drained out pretty quickly. Within a couple days the course was playing like normal and we all remain thankful for the resiliency of the staff and the course. This certainly could have spelled disaster for one of our busiest months of the summer, but instead this remains a story of fortitude. So with the course in great shape heading into the back half of our season, there’s no better time to come visit!